Genteel? Hardly. the Devon resort is gripped by a dispute that is turning nasty, says Clive Aslet.

This article is reproduced with kind permission from the Daily Telegraph. See the original piece here. 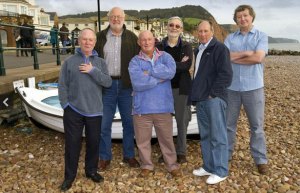 “We’re not your usual people who take to the streets,” declares Ed Harrison, a silver-bearded retired chartered surveyor. “A grey revolution is going on.”

We are in Sidmouth, a sweet-natured Regency town on the south Devon coast. Externally, nothing much would seem to have happened here since a hapless local youth, out sparrow-shooting, put a shot through the window of Woolbrook Cottage and nearly changed the course of British history: the future Queen Victoria, then a baby, was sleeping just below.

That wouldn’t happen these days. There are no local youths. No, I exaggerate: some, but residents tell the old joke about the Paddington porter who shouts: “Weymouth for the Continent, Sidmouth for the incontinent.” As the broadcaster Jeremy Vine, who goes to Sidmouth most summers with his in-laws, wrote in The Telegraph earlier this year, “There would never be a riot in Sidmouth.” Don’t bet on it, Jeremy. Sidmouth is angry.

Think Last of the Summer Wine joins Occupy. I met the leaders of the Sidmouth protest movement in a conservatory hung with photographs of old motor charabancs, and with a couple of Jack Russells about the ankles. In other circumstances, they might be hatching some prank to spring on Nora Batty. But don’t mistake the strength of feeling of these retired members of professions. Local democracy isn’t working. Under the slogan Save Our Sidmouth (SOS), they are determined to prevent what they see as the despoliation of the town. They’re taking to the streets on November 3, in what they’re calling a mass march.

To understand their passion, you have to picture Sidmouth. Until 1800, it was a fishing village, happy to haul its boats up on to the shingly beach, beneath the red sandstone cliffs of the Jurassic Coast. Tens of thousands of mackerel might be landed in a single catch. But in the Regency period, the town went after bigger fry, in the shape of the fashionable society that was following the Royal Family to the seaside. Sidmouth became all verandahs, awnings and locally caught crab. You can study the seafront of 1814 in a long panorama reproduced in the typically elegant tourist pavilion that the town council has opened on the esplanade. The bucks in tailcoats and ladies in Jane Austen bonnets may have gone, but most of the architecture is still there.

Sidmouth became an epicentre of the craze for cottages ornées – gentlemen’s residences designed in faux rustic style. Look at the thatched roofs on the seafront. When the future Elizabeth Barrett Browning came to Sidmouth in 1832, the house she rented had previously been occupied by the Grand Duchess Helena of Russia. Sidmouth had found its form.

According to the protesters, it is still a singularly delightful and, above all, thriving place. Other seaside towns may have lost cachet when the holiday trade moved to Spain; not Sidmouth. By looking after itself, it continued to attract summer visitors and, increasingly, property buyers. There’s little unemployment.

The Angel of Death seems to have passed over this British high street and spared it. All the shops appear to be let. The entire span of human life is satisfied by the supermarket offering, provided by Waitrose, Lidl and a Tesco Express. Sidmouth’s clubs for cricket, croquet, lawn tennis, bowling, rugby, football and golf are buoyant.To them can be added both a cottage hospital and a skateboard park.

Since 1846, local amenities have been zealously guarded by the Sid Vale Association, the oldest civic association in Great Britain. Thanks to a bequest, it can distribute grants of over £100,000 each year. A wall of bronze plaques proclaims the awards won by the Connaught Gardens.
Architecturally, there have been some losses, notably Lord le Despenser’s Marine Villa, or The Knowle, which The Beauties of Sidmouth Displayed of 1816 describes as “a large thatched building… The view from it is extremely rich and picturesque.” The view is still there, but the house has become so degraded that it has been de-listed. Who owns it? The very people who you might have thought would have Sidmouth’s heritage most at heart: East Devon district council.
That’s just the trouble, according to SOS. The council has some rum notions that don’t chime with local opinion. Localism, one of David Cameron’s big ideas, has passed this deeply entrenched Tory stronghold by. As the council leader Paul Diviani told the Sidmouth Herald earlier this month, “weight of numbers will not sway planning arguments”. So much for those who thought that weight of numbers was what democracy was all about.

Resentment has boiled to a head with the proposal to designate 12.5 acres of privately owned land just outside the town as an industrial park. To Richard Thurlow, a retired Arup engineer who chairs SOS, this is out of scale with Sidmouth and its requirements, let alone the Sid Valley’s designation as an Area of Outstanding Natural Beauty. It will be dwarfed by the so-called Exeter Growth Point, now in planning, which will include a new town (Cranbrook, 2,900 homes), the Exeter Science Park, the Skypark business park and the Exeter Gateway freight terminal.

“We are not against modest enlargements and improvements that are compatible with the size of the town. Yes, we want start-up units for local school-leavers. Yes, we need low-cost housing. But the council has not demonstrated a demand for the industrial park. And the relocation of a small existing industrial site could open the door to a large supermarket, sucking the oxygen from healthy local shops.”

There’s already an industrial park in Honiton, eight miles away. The council knows about it – in fact, it wants to move there. Hundreds of thousands of pounds have already been spent on, or budgeted for, feasibility studies.

Ultimately, the council intends that the move will be self-funded – shorthand for the sale of building land around its Knowle site. Yet this can only detract from the “extremely rich and picturesque” landscape that has managed, by some miracle, to survive local authority ownership. In May, Sidmouth was proud to have been declared the first “civic arboretum” in the country, celebrating the magnificent heritage of old trees around the Sid Valley. “Crass” is the only word that resident Tony Green can find to describe the council’s response to the initiative. “When the director of the Westonbirt Arboretum arrived to open it, the entrance to The Knowle was blocked by a council van, there to erect a ‘No Right of Way’ sign.”

Mr Green has spent “four or five months forensically going through the minutes” of the East Devon Business Forum, a lobby group spearheading Sidmouth’s development-led future. It is not exactly at arm’s length from the council, which provides its funding and premises. The honorary secretary is the council’s economic development manager; the chairman is also a councillor, and a planning consultant and builder, to boot. “It represents a small group of landowners and developers that have nothing to do with the Chamber of Commerce.”

Sidmouth is nothing if not genteel. Its nostrils are offended by the odour arising from these arrangements. Parallels, however unlikely, are made between Sidmouth in 2012 and one-party Liverpool and Lambeth in the Eighties. Without the ventilation of change, the council has, some feel, begun to smell.

Clive Aslet is Editor at Large of ‘Country Life’.

One thought on “Save Our Sidmouth reaches the Daily Telegraph!”