Advertisements for job vacancies at EDDC now include the mention ‘In the future, East Devon District Council may relocate from its current headquarters to premises elsewhere in the district.’  Presumably this means that despite the recent refusal of the Outline Planning Application for Knowle, the parkland may still be under threat.

Last Sunday’s guided walk through the grounds, which include part of Sidmouth’s Civic Arboretum, was led by Hugh Angus ( former Head of Collections at Westonbirt National Arboretum) who knows a lot about trees!  Here are a few special ones he pointed out: 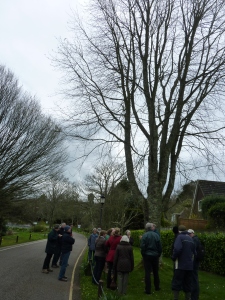 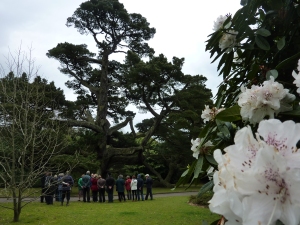 Everyone knows ‘Old Monty’ (with the thickest girth of its type in the UK)   but may not know how to be sure it’s a Monterey Pine. Look for fist-sized cones growing directly from the bark. 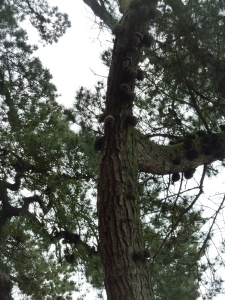 .And you’ll recognise the Monkey Puzzle tree, or Chile Pine, with its thorny bark and branches. This one’s a male and in excellent health. Just as well, as these ancient trees, with edible seeds (the Araucanian Indians ate them fresh or boiled), are globally under threat.

Hugh Angus will be back in Sidmouth in June, with broadcaster Roy Lancaster, of RHS fame, for an event at Kennaway House…and more guided walks, no doubt! Details soon at   http://www.sidmoutharboretum.org

One thought on “Getting to know the Knowle”