Ex-Councillor Graham Brown’s  former ward included  Feniton, a village under threat of development encouraged by their former councillor. The aerial view shows the numbers of houses planned, for your information.  The Local Plan housing allocation for the village is for 35 homes, but proposals for almost 300 are shortly due to be approved. 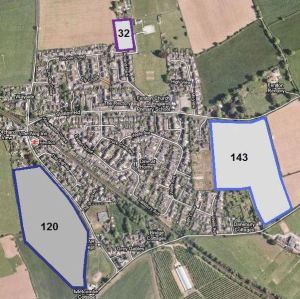 Things will rapidly get worse, nationwide, if new planning regulations (NPPF) go ahead, from March 27th 2013.  This is the deadline, after which any Local Authority without a 5-year Plan in place,  will have no choice but to approve what Graham Brown termed  ‘a stampede’ of planning applications from developers. EDDC, like many other councils, has no 5-year Plan.

SOS is therefore supporting next Saturday’s Mass March at Feniton, organised by the newly-formed East Devon Alliance (a non-party-political pressure group uniting all seven towns and many villages across the District).   The march aims to delay this deadline, with the help of national press and major organisations.

Details of the March are here  feniton-march-poster 23.03.13